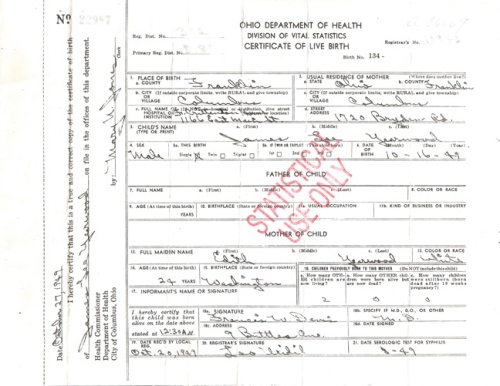 The peculiar document that passes for my birth certificate.

Then again, I sometimes wonder what happened to the two children by presumably different and also unnamed fathers my mother gave birth to before me. Poor Edith, that home for unwed mothers must have been a dreadful place. When I was a child, single mothers were either widows or divorcees and “unwed mothers” were social outcasts commonly labeled as sluts or whores. I remember it well as an object lesson in hypocrisy.

Even though I have no way of proving it, it’s very likely my mother was also manic-depressive. While not conclusive, the details on my birth certificate—three children born out of wedlock by the age of twenty-four—strongly suggest sexual promiscuity, a symptom of bipolar disorder circumstantiated by numerous psychiatric annals, not to mention my own experience. What is certain is that in the ’40s and ’50s, manic-depressives were sometimes surgically “cured” by prefrontal leucotomies (the tragedy of Rosemary Kennedy is probably the most famous example of this).

Inasmuch as I’ve been unable to unearth any record beyond my birth certificate of Edith Yearwood’s existence, including a search of the Social Security Death Index, I fear she may have been institutionalized only to die an anonymous death. I hope I am wrong. If by chance you know an eighty-five-year-old woman named Edith Yearwood, originally from the state of Washington, please tell her James Lee sincerely wishes her well. 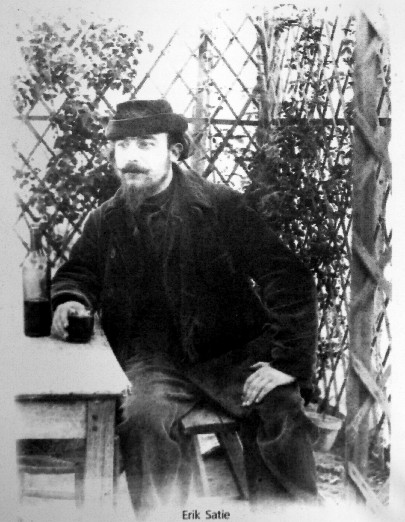 Ever since the age of ten, when I first learned to play his “Gymnopedies,” Erik Satie’s music has been a part of my life. To commemorate this year’s anniversary of Erik’s birth, I offer “The Memory of Monsieur Satie,” Part IV of a piano suite I wrote for Pulitzer nominee Cyrus Cassells in 1984. 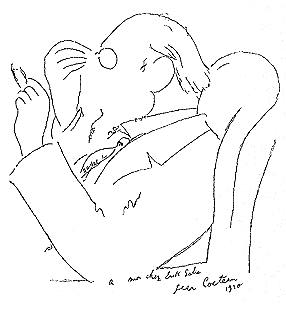 art from the heart

By drawing pictures in sand on a light table, Ukrainian artist Kseniya Simonova tells the story of the World War II German invasion and occupation of Ukraine. Sounds simple, doesn’t it? Prepare to be amazed. This young woman possesses a rare talent that will take your breath away. If you’d like to learn more about Ukrainian art and how it reveals that country’s tragic past, uncertain present and hope for the future, I highly recommend spending some time at the excellent website ArtUkraine.com.

one for the history books 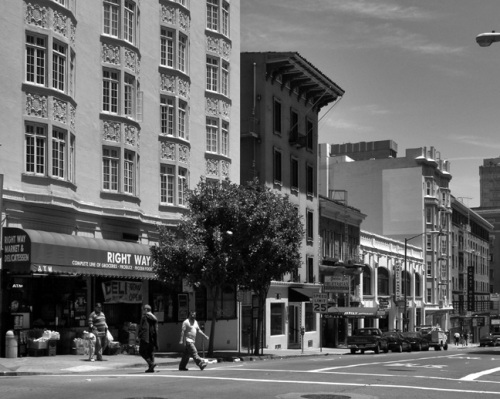 Written by architectural historian Michael Corbett* and photographed by me, the survey nominating the Tenderloin to the National Register of Historic Places has been accepted and approved by the State Historical Resources Commission and the National Park Service. The most fascinating and, in my opinion, the best neighborhood in San Francisco is now officially the Uptown Tenderloin Historic District.

Mark,
Speaking for Heritage, we are delighted with this anticipated news.

We very much look forward to working with stakeholders in the Tenderloin to advocate and educate on preservation of our city’s great architectural and cultural identity, and how, with good planning and neighborhood participation, we can improve the quality of life in this great neighborhood.

Congrats to you for your keen eye and careful documentation, Randy Shaw for his vision and leadership, to the superb architectural historian and author, Michael Corbett, who continues to document and write on places important to all San Franciscans, and to the many other important people who made this happen. 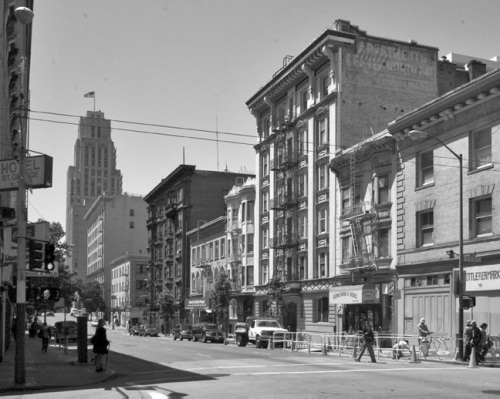 getting lost in another world

My inner life, fueled by my imagination, is so real and engaging that were it not for my fascination with the world around me, I could easily live out my life as a hermit, immersed in the pages of old books and manuscripts. Sketches of Japanese Manners and Customs is one such book. Written by J.M.W. Silver, Lieutenant Royal Marines, Light Infantry, and published in 1867 by Day and Son, Limited, Lithographers and Publishers, London, Sketches is a first-hand account of Japan in the days of the Mikado as seen through the eyes of an English officer; a skilled observer whose military objectivity was tempered by his obvious fascination with what he saw. The book is filled with exquisite chromo-lithographs that are “fac-similes of native drawings” reminiscent of the Ukiyo-e woodblock prints of Hiroshige. It is, for me, mental aphrodisia.

Below are a few of the plates, along with excerpts from the text to explain them. 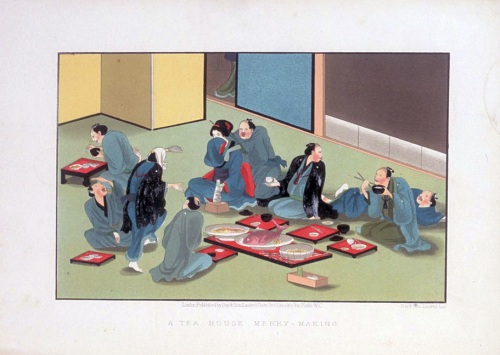 Some of the tea houses in the vicinity of large towns are much frequented in the spring-time by large parties, on account of the beauty of their gardens. The chromo-lithograph opposite represents one of these parties, some of whom appear to have been indulging too freely in saki.* The fellow dancing and waving a fan about is apparently addressing a love-song to the lady opposite, whose husband is evidently desirous of putting a stop to the flirtation. 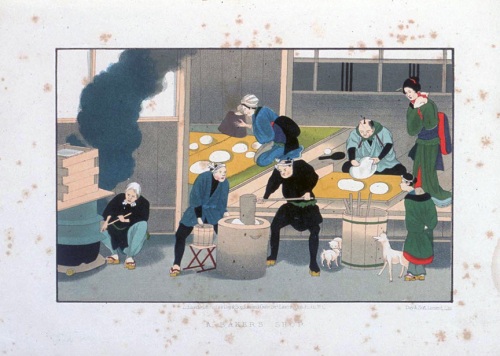 The baker’s shop opposite affords a good specimen of the wayside scenes, and conveys a fair idea of an ordinary Japanese house. It will be noticed that the puppies in the foreground, as well as the cat in the girl’s arms, are very differently delineated; but such animals are the especial stumbling-blocks of the native artists, although they faithfully represent birds, fishes, and reptiles. 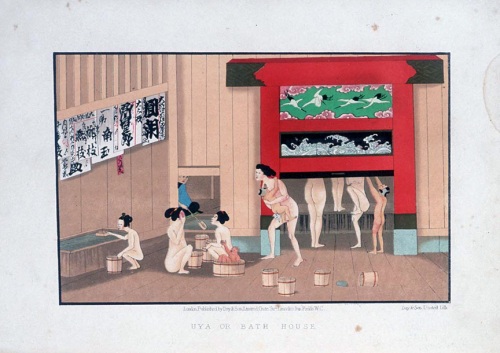 Some bath-houses have the women’s lavatory separate; and one of these is the subject of the illustration. This arrangement, however, is more for convenience than in compliance with the demands of modesty as is evidenced by the fact that a male attendant is supplying water; and that his presence is plainly a matter of perfect indifference to the women bathing, with their children, in his immediate vicinity.

A high resolution scan of the entire book is available for download here.