06 September 2011 marked the passing of friend and film-maker George Kuchar. He left an indelible mark on the world with his wit and humor and his many films.

Farewell, George. I’m honored to have known and worked with you.

if I lived there

. . . I would probably never leave. Near the end of April I was a guest of the Sociology Department at Notre Dame de Namur College, which has its main offices in the old Ralston mansion in Belmont, California. While there, I had an opportunity to photograph the mansion house. Enjoy.

the real sunshine in my life

Man is most nearly himself when he achieves the seriousness of a child at play.

These photos are part of a series I shot yesterday while on a visit with my grandson Clyde, who will be three years old on June 22nd. We were playing with a little plastic rooster wearing a grass skirt and coconut shell bra (it’s complicated), and a plastic Geronimo (you know, the Native American who bravely resisted the US Army back in the 19th century). Geronimo and the rooster were chasing each other around some bowls of water (ahem! pardon me, some LAKES and PONDS) and the rooster would occasionally jump from a bridge (don’t tell me you can’t see the bridge), shouting,”Geronimo!”

something unexpected happens to inject some pure, undiluted joy into my life.

Leonardo and me at the Noir City 9 opening party. (Photo by Mike Humbert)

Last week my friend Mike Humbert drove all the way to San Francisco from Paradise, California to take me to the opening of Noir City 9 at the Castro Theater. Before the show we met with festival director Eddie Muller, “the voice of Noir” Bill Arney, and a handful of others at Dashiell Hammett’s old Post Street apartment, which is being lovingly restored by Robert Anderson. Altogether a completely delightful evening, one I’ll remember for a long time to come.

Friend and fellow historian Peter Field and me at Noir City 9. (Photo by Mike Humbert)

The following paragraphs are from An Unquiet Mind1 by clinical psychologist Kay Jamison, PhD, Professor of Psychiatry at the Johns Hopkins University School of Medicine and one of the foremost experts on bipolar disorder, who is herself bipolar. Writing as both clinician and subject, Dr. Jamison vividly describes what it’s like to be manic-depressive.

There is a particular kind of pain, elation, loneliness, and terror involved in this kind of madness. When you’re high it’s tremendous. The ideas and feelings are fast and frequent like shooting stars, and you follow them until you find better and brighter ones. Shyness goes, the right words and gestures are suddenly there, the power to captivate others a felt certainty. There are interests found in uninteresting people. Sensuality is pervasive and the desire to seduce and be seduced irresistible. Feelings of ease, intensity, power, well-being, financial omnipotence, and euphoria pervade one’s marrow. But, somewhere this changes. The fast ideas are too fast, and there are far too many, overwhelming confusion replaces clarity. Memory goes. Humor and absorption on friend’s faces are replaced by fear and concern. Everything previously moving with the grain is now against…. you are irritable, angry, frightened, uncontrollable, and emerged totally in the blackest caves of the mind. You never knew those caves were there. It will never end, for madness carves its own reality.

It goes on and on, and finally there are only other’s recollections of your behavior…. your bizarre, frantic, aimless behaviors….. for mania has at least some grace in partially obliterating memories. What then after the medications, psychiatrist, despair, depression, and overdose? All those incredible feelings to sort through. Who is being too polite to say what? Who knows what? What did I do? Why? And most hauntingly, when will it happen again? Then, too, are the bitter reminders….. medicine to take, resent, forget, take, resent, and forget, but always to take. Credit cards revoked, bounced checks to cover, explanations due at work, apologies to make, intermittent memories (what did I do?), friendships gone ordained, a ruined marriage. And always, when will it happen again? Which of my feelings are real? Which of the me’s is me? The wild impulsive chaotic, energetic, and crazy one? Or the shy, withdrawn, disparate, suicidal, doomed, and tired one? Probably a bit of both, hopefully much that is neither. Virginia Woolf, in her dives and climbs, said it all, “How far do our feelings take their colour from the dive underground? I meant, what is the reality of any feeling?

The highs are indeed stellar; if only I could forever remain on that plane of experience and awareness! Inevitably comes the fall from grace, when psychosis shatters the mirror of my Self into myriad fragments and darkness descends on the landscape of my mind.

Sorry about the advertising at the beginning, but it only lasts for a minute or so. For some background about the interview, refer to Holly Gray’s post on the TV Show Blog Living With A Mental Illness Isn’t Always Living.

The peculiar document that passes for my birth certificate.

Then again, I sometimes wonder what happened to the two children by presumably different and also unnamed fathers my mother gave birth to before me. Poor Edith, that home for unwed mothers must have been a dreadful place. When I was a child, single mothers were either widows or divorcees and “unwed mothers” were social outcasts commonly labeled as sluts or whores. I remember it well as an object lesson in hypocrisy.

Even though I have no way of proving it, it’s very likely my mother was also manic-depressive. While not conclusive, the details on my birth certificate—three children born out of wedlock by the age of twenty-four—strongly suggest sexual promiscuity, a symptom of bipolar disorder circumstantiated by numerous psychiatric annals, not to mention my own experience. What is certain is that in the ’40s and ’50s, manic-depressives were sometimes surgically “cured” by prefrontal leucotomies (the tragedy of Rosemary Kennedy is probably the most famous example of this).

Inasmuch as I’ve been unable to unearth any record beyond my birth certificate of Edith Yearwood’s existence, including a search of the Social Security Death Index, I fear she may have been institutionalized only to die an anonymous death. I hope I am wrong. If by chance you know an eighty-five-year-old woman named Edith Yearwood, originally from the state of Washington, please tell her James Lee sincerely wishes her well. 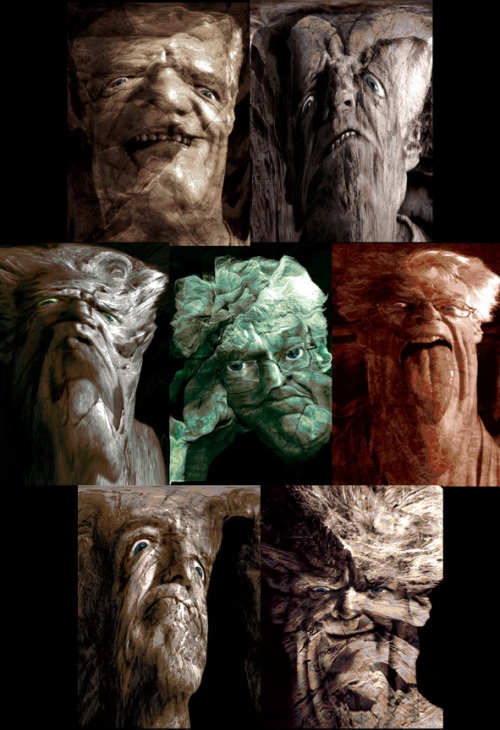 These are some of the characters that like to have shouting matches inside my head, the manifestations of my psychosis. My particular brand of psychosis involves the fragmenting of my Self and my reactive comprehension of who I am. My thoughts and feelings take on lives of their own, becoming disparate inner voices over which I have no control, each of which is like a different “me.” I lose all sense of who I really am and thus my connection to reality is severely impaired if not altogether broken. Personal continuity is irrevocably fractured and I disengage from people and projects—my life—until such time as the episode ends and there is once again only one “me.” Then I am faced with the daunting and often humiliating tasks of repairing relationships where possible and of rebuilding my life from the pieces into which it has been splintered.

While the language I use here is deliberately non-clinical, my descriptions are subjectively accurate and true.

This poem by J.C. Squires so perfectly and elegantly describes what happens inside my head, I wish I had written it.

I and myself swore enmity. Alack,
Myself has tied my hands behind my back.
Yielding, I know there’s no excuse in them—
I was accomplice to the stratagem. 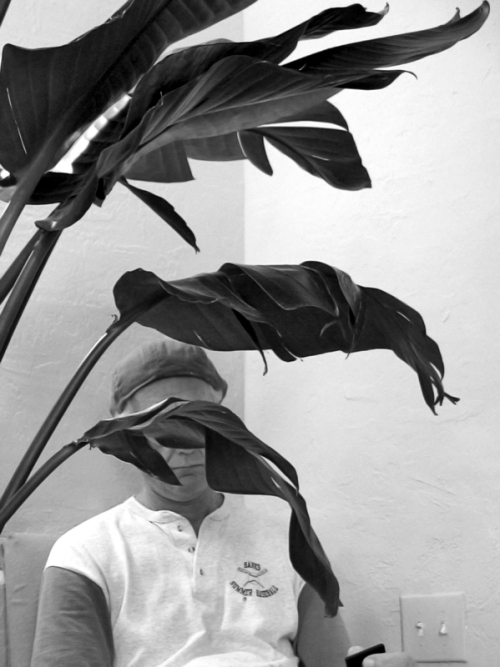 Dispossessed within the raging battlefield of my mind, hounded by thoughts and feelings over which I have no control: a casualty of my own psychosis. As to medication, I might as well be taking aspirin.

It took me half an hour to write this.

Note to the bean counters at Wellcare: go fuck yourselves.

A recent sunset as photographed from my rooftop.

the upside of insomnia

If indeed there is anything at all good about having a sleep disorder, it’s that I’ve witnessed many glorious sunrises. From my rooftop, I recently photographed the sun’s ascent above the horizon as the full moon was setting. 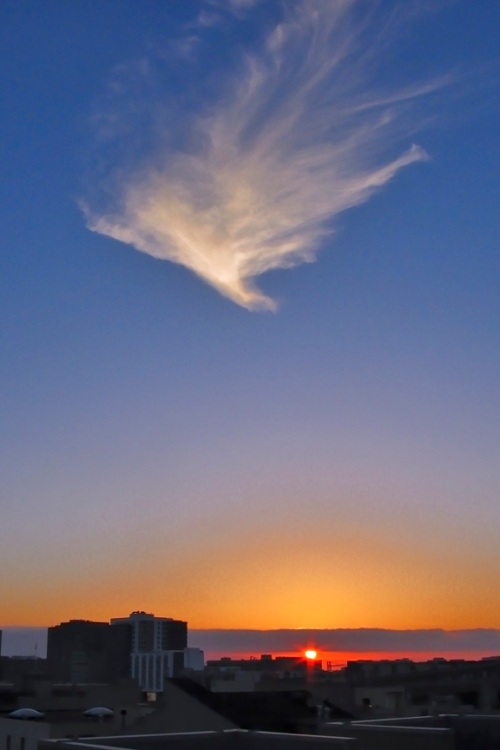 a visit with Serge

This post has been moved and incorporated into my story about Serge titled “Temple of the Heart’s Imagination”, on my history site Up from the Deep.